VIC Technology Venture Development primarily is focused on building companies around high-impact life science technologies, including medical devices, therapeutics, diagnostics, and advanced instrumentation. More than eighty percent of the pipeline of new opportunities that our team reviews is in these areas. They provide the combination of significant societal benefit and high commercial opportunity which VIC seeks.

When VIC began, however, we were technology agnostic. We simply were looking for the best technologies we could find that were available for license from universities and that might serve as a good intellectual property foundations for forming new companies. As we became more sophisticated in our approach, we started bringing more life science-experienced members into our team and began focusing on life science opportunities. Yet, still today, we will step outside of the life science box for the right opportunity. Why? 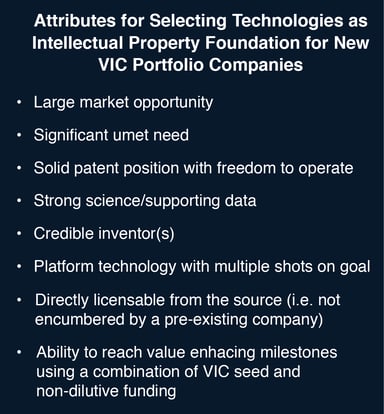 Even within the life science arena, there are areas where we have expertise and areas where we do not. Naturally, we focus more on opportunities directly in line with our nationwide team’s experience areas. When we find a life science opportunity that looks interesting, but in a segment where we do not quite have sufficiently deep in-house experience, we reach out to our broad network of advisors and connectors to supplement our internal team’s experience. Outside of life science, we have less of that. However, if one of our internal team members is excited by a given technology and wants to lead a due diligence effort, then we allow that champion to take it forward through our assessment process. The due diligence includes determining whether or not we can put together a strong, experienced initial leadership team for the potential new company relevant to the underlying technology.

Tesseract Structural Innovations (see also Enjoy The Ride: Inside an Automotive Startup) is a good case in point. Far afield from life science, Tesseract is based on a unique energy absorbing structure designed to save lives in automotive crashes. The structure was specifically designed to address small overlap front crashes which account for approximately one quarter of all auto crash deaths each year and for which improved safety options are urgently needed.

When the idea was brought to VIC, it was just a set of engineering calculations and a few sketches. It was not the sort of disclosure that might ordinarily capture the VIC Opportunity Assessment Team’s attention. However, the technology found an internal champion within VIC. As a PhD mechanical engineer, I found the approach that the inventor described quite interesting. I also knew the inventor personally, and that he was an excellent engineer, which gave me the encouragement to wade into the technical calculations. The fundamental idea was simple. The structure was designed to raise the crush force at a controlled rate to a maximum level and then hold it there during the duration of the crush. The structure crushes as the crash takes place and energy is absorbed in crushing the structure. I won’t go into the technical details here, but by taking the force rapidly to a desired level and holding it there through clever structural design and material selection, the amount of energy absorption that could be achieved approached the theoretical maximum, i.e. within the force and dimensional constraints of the device.

I went through the calculations the inventor had done and they looked correct to me. I had two big initial questions about the technology: 1) although the design was clever, given the relative simplicity of the concept, why had someone not already done something similar and 2) how did the absorbed energy compare to solutions that automotive companies were already working on to improve crash energy absorbance? An initial patent review did not uncover problematic competing intellectual property. To help me address the second question, the inventor, who had long standing connections within the automotive industry, connected me directly to heads of crash safety at two of the largest automobile companies in the world. The conversations with both of those people went similarly. Since patents had not yet been filed, I couldn’t describe the actual structure design to them except in terms of function. I told them the estimated weight, the estimated energy absorbance, the estimated cost, and that it would fit into their existing vehicle structures with almost no structural modifications and no increase in frame dimensions. The response from both of them was essentially “If you could actually do that, it would be complete game changer. However, we have looked at every possible way to absorb energy in these crashes and we are skeptical that you can actually achieve those specifications you describe”.

After those calls, I went back through the calculations to re-confirm that the engineering estimates were reasonable. I could not find any errors. On my recommendation, VIC therefore launched our deep-dive due diligence process which included looking deeper at the patent landscape, market barriers, production planning, financial requirements, and more. The opportunity was then presented to the VIC Board of Directors where it was approved, the new company (Tesseract Structural Innovations) was legally formed, the intellectual property was transferred to the company, and the VIC Investor Network made an initial investment of $250,000 into the newly created company.

Even though the Tesseract’s technology was outside of life science, it checked the other boxes we look for at VIC: high impact, experienced team available, and big market opportunity. The potential for a fast market scale-up was exciting, but also presented several challenges. One of the vehicles that we identified as a target opportunity from our early calls with the auto makers was a model that—by itself (i.e. just that one model from that one car company) — presented a $100m to $200m market opportunity for Tesseract. If the technology were adopted for that vehicle, the company would need to scale its production from zero to $100m+ in parts very quickly. While certainly a challenge, there appeared to be viable options including partnering with existing Tier 1 auto company suppliers. Today, Tesseract has patented its technology, built and refined several prototypes, and convincingly demonstrated the exceptional energy absorbance promised (better even than the original estimates). It has generated significant industry interest, partnering agreements, recognition, and excitement. Most recently, Tesseract won the Global Automotive & Mobility Innovation Challenge in the Conventional Mobility Technology Innovations category. The Company also has expanded the applications of its impact absorbing structures to the protection of electric vehicle batteries in crashes to prevent dangerous explosions.

A second example of VIC stepping outside of our life science focus is BlueInGreen (see also BlueInGreen Uses Wastewater Treatment Technology to Fight COVID-19). BlueInGreen has a unique approach to dissolving gas in water, including oxygen for wastewater treatment and water ecosystem restoration, ozone for water sterilization, and carbon dioxide for pH control. The company has installations across the United States, is profitable, and growing. The origin for BlueInGreen has some overlap with Tesseract in that the early due diligence included a prospective customer saying that he already had seen every way there was to solve the problem, i.e. in this case, how to efficiently dissolve gas into water. When provided a demonstration of a very early prototype system, however, his reaction was quite different. In response to witnessing the dramatic rise in oxygen level in a short time from a small apparatus, he said, “Well, I haven’t seen that before!”.

There are many advantages for a venture development firm like VIC to focus on specific areas of unmet market need (i.e. in VIC’s case, focusing on life science opportunities). Paramount to these is having the in-house expertise needed to select – as well as develop – the most promising technologies. However, we believe there are benefits sometimes already stepping outside the box if the opportunity is favorable enough and we can assemble the right team. It allows us to take forward big opportunities that we would otherwise miss if we were too strict in our selection boundaries and it provides an additional layer of diversification for our investors. VIC investors are diversified by number of companies (sixteen and growing), by stage of development (from new startup to profitable), and by sector (including different life science segments and, as noted herein, some companies outside of life science sector altogether).